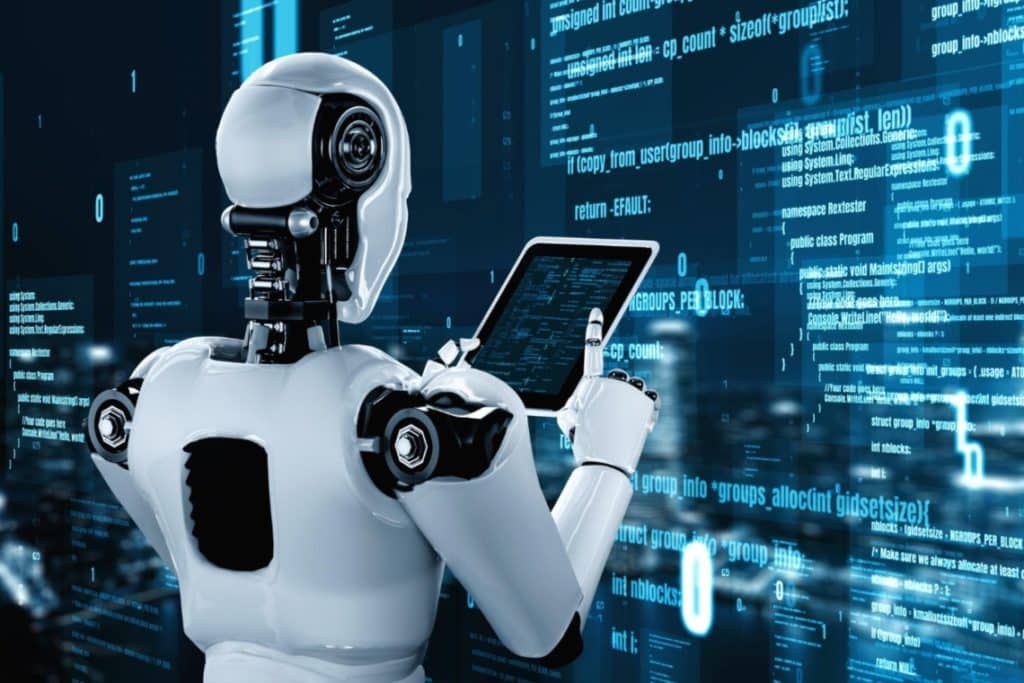 Collaboration between distributed artificial intelligence and blockchain is now the future of banking and insurance.

Blockchain, on the other hand, is the ultimate decentralized framework. Specifically, it discusses the intelligent management inherent in reading and writing to replicated databases. In blockchain, information is mathematically validated through an algorithm and not through trust placed in a central entity.

These two decentralized structures, DAI and blockchain, urgently need to work together. Otherwise, the loss of customers, even in the context of Industry 4.0, would be imminent.

The advantages of combining artificial intelligence and blockchain

The advantages of combining DAI and blockchain are numerous.

First, the ability to create one or more interconnected banking and insurance blockchains speeds up transactions, improve their security and transparency, as well as optimize data control.

In addition, from this alliance between financial companies, there would be interesting developments in the perspective of the personalization of products and services for the end customer. For example, customer service managed by chatbots and guided by machine learning and algorithms. This will promote a better and faster response to customer issues.

Additionally, given the impending advancement of artificial intelligence, a channel like block chain will necessarily be necessary for its purposes. Indeed, the blockchain environment is ideal for exchanging information and communicating securely.

This is due to its peer-to-peer network, which has a structure that works broadly like the human brain, given the presence of nodes and the way information and data are recorded.

The functioning of the blockchain indeed concerns exchanges between nodes of the system, valid for all in real time. The novelty: there is no central authority to manage them.

Moving on to financial institutions, we know that their mission for the next few years will be to capture the new target audience of millennials. In other words, young people prefer the sharing economy to traditional financial services. The sharing economy is based on accessing and exchanging resources, rather than buying them.

Thus, to seduce the generation of millennials, a far from restricted circle, it is necessary that finance embraces the collaboration between artificial intelligence and the blockchain if it hopes to survive.

DAI and blockchain: areas for improvement

Due to the future interaction between artificial intelligence and blockchain, there will be many sectors that will change and benefit from it.

Among the first is the security sector. Indeed, the detection of suspicious transactions is one of the challenges of the future for banks. Some are already currently using machine learning services that can instantly identify scams.

Personalization, which relies on the recommendation system that underpins Facebook, Amazon and Spotify, in which “friends” suggest what to do, is set to spread widely.

The speed improvement is also not without importance. The transfer of information and data will allow consumers to interact better and faster with financial institutions.

Using blockchain to give stakeholders the ability to collect loyalty card points and invest them in various markets, with the peer-to-peer network responsible for automating checks and balances, is one many possible scenarios in the medium term.

As previously predicted, customer service will also benefit significantly. Indeed, the use of chatbots, programs capable of simulating human conversations, will be the constant of the future.

The chatbots will function for all intents and purposes as experts answering the FAQs of internet users who log into the website. The same will apply to the development of algorithms capable of meeting the different needs of customers.

Finally, the loan, which, after analyzing the login credentials of all customers registered on the blockchain, will allow faster and more efficient release of funds.

The words of Orlovsky Maxim

Maxim Orlovskyamong the most renowned experts in neuroscience, wrote an interesting post on Medium not too long ago about blockchain and artificial intelligence.

“Beginning with biological evolution and ending with the free economy, evolution is always about competition and adoption.

What accelerated the process of human progress a million times? Language as a communication tool […] So here we revealed our main secret: blockchain will do for multi-agent AI the same thing that written language created for humans; it should provide means for accelerated evolution.

This means that blockchain will be to artificial intelligence what written language has been to the human brain and its constant evolution.

Specifically, it will mean that, as blockchain provides a channel to facilitate the secure exchange of data and information, the impact of artificial intelligence will be much the same as the advent of writing. .

With the widespread dissemination of the association between artificial intelligence and blockchain, there would also be interesting changes for the Industry 4.0 world, as it would change the way things are produced.

Specifically, we are not just talking about software, algorithms, automation, robots and hardware, but more complex concepts, such as the design and production of goods on demand, dematerialization and disintermediation.

It is important to define what is new in Industry 4.0 to have a clear picture of the situation. First, smart manufacturing, in which the production system will revolve around the monitoring of physical business processes by computer systems and decision-making processes will eventually be decentralized.

Also, the production of goods from scratch. With Industry 4.0, other aspects relating to the intellectual property of the good, copyright and the right to sell come into play.

The blockchain will play a key role in this system, as it will have to secure and control the identity of people, guaranteeing their anonymity.