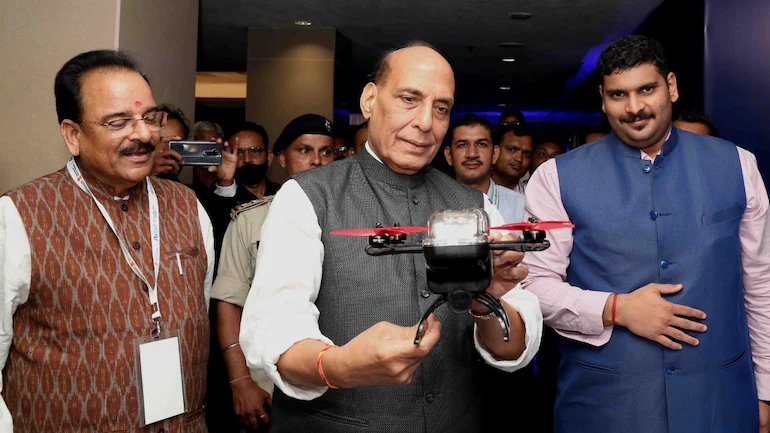 On 26/07/2022, the first ever “Artificial Intelligence in Defense” exhibition was held in New Delhi. The event was hosted by the Indian government and led by Indian Defense Minister Rajnath Singh. The exhibition aimed to showcase the newly produced AI products which are expected to be used for defense purposes by the Indian Defense Force.

When articulating Singh to the exhibit participant, he proposed;
“We must use artificial intelligence (AI) for the progress and peace of mankind. It should not happen that one country or group of countries establishes dominance over this technology – just like nuclear power – and the remaining countries are not able to enjoy the fruits of this technology,”

These three products are just the start of a ton more to come, Indian Defense Secretary Ajay Kumar’s statement suggests, saying DPUS will launch another 75 AI-powered products on the 75th anniversary. from India. The committee seemed excited about the upcoming launches, as they are expected to increase soldier safety and overall benefit the ease of work for the military. These products will be the soul of the “Azadi Ka Amrit Mahotsav” initiative which they will also launch on the occasion of the 75th anniversary.

Overall, this is a big step towards better use of AI and aims to ensure peace and stability in the region. Yet not all the Department of Defense has cherished the AI ​​innovations that are being made daily.

Rajnath Singh showed his concern about the misuse of technologies to come. As he also mentioned to the committee;
“We cannot stop the progress of artificial intelligence and we must not try to stop its progress. But we have to be careful about that,”

And again, in his speech, he added;
“We need to work on AI with extreme caution so that this (technology) does not get out of our control in the times to come,”

Singh’s concerns are highly justified; with ever-changing technology, the threats associated with it are also increasing. India’s excessive power can create a significant difference in control and, instead of promoting peace, can cause further instability in the region. But hearing what Singh promoted during his speech as defense minister is enough assurance that he comes with a good heart and wants peace and prosperity for his country.

Moreover, if we look at the other countries in the region. China is one of the largest producers of AI goods in the world, but the Chinese military has not concatenated any AI innovation into its defense systems. They also do not plan to include AI products in their military industry.

On the other hand, Pakistan has already started using AI in its defense forces. In particular, the Pakistan Air Force has recently introduced CEW (cognitive electronic warfare) in its air force systems. After the incident Indian defense analyst Balakot Prawin Sawhney suggested that the Pak Air Force was already using CEW, and that was the reason for their immediate response.