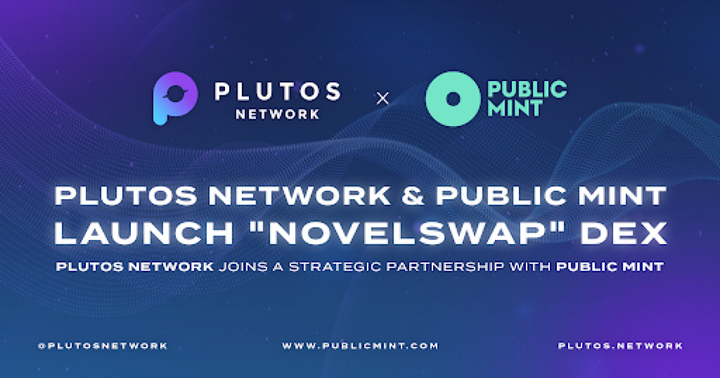 Plutos Network, the leading multi-channel-based synthetic DeFi hub, is excited to announce that it will be launching NovelSwap, a next-generation DEX, on the Public Mint network. The two companies will also expand their collaborations in other future solutions.

Public Mint is an open and comprehensive blockchain platform for fiat currency, where funds are fully guaranteed and held on deposit with institutions regulated and insured by the FDIC. The launch of NovelSwap on Public Mint will mark the start of a deep collaboration between the two companies. Going forward, Plutos Network will work with the Public Mint team to integrate the simple and powerful payment system offered by Public Mint.

NovelSwap is already live on Public Mint testnet now, and we have a small group of beta testers who are testing the DAppswap and providing valuable feedback to our developer team. NovelSwap is expected to launch on Public Mint’s mainnet in about a month, at the end of October.

By launching NovelSwap on Public Mint, a native fiat blockchain, Plutos Network will offer the Public Mint community a way to exchange their MINT tokens for their native USD. And in the future, any project launched on Public Mint will be able to use NovelSwap for trading.

â€œAs we see rapid growth of some leading public blockchains over the past quarter, Public Mint is one where we see very promising potential for mass adoption,â€ said Juan Capilla, CEO of Plutos Network. By building NovelSwap on Public Mint, we will be able to offer the best trading services for PLUT traders.

NovelSwap will be the very first solution built by an independent developer on top of the Public Mint blockchain, and it will offer Public Mint users the first gateway to trade using their native USD.

â€œWe are delighted to have the first project independently built on our network – especially by such a reputable group as Plutos Network,â€ said Jorge Pereira, co-founder and CTO of Public Mint. â€œIn addition, we are excited about the potential of this partnership and look forward to taking our collaboration to new heights in the near future.

The features and benefits of NovelSwap include:

In addition to Public Mint, Plutos also plans to launch NovelSwap on BSC and Ethereum in the near future.
Image from LaunchTeam