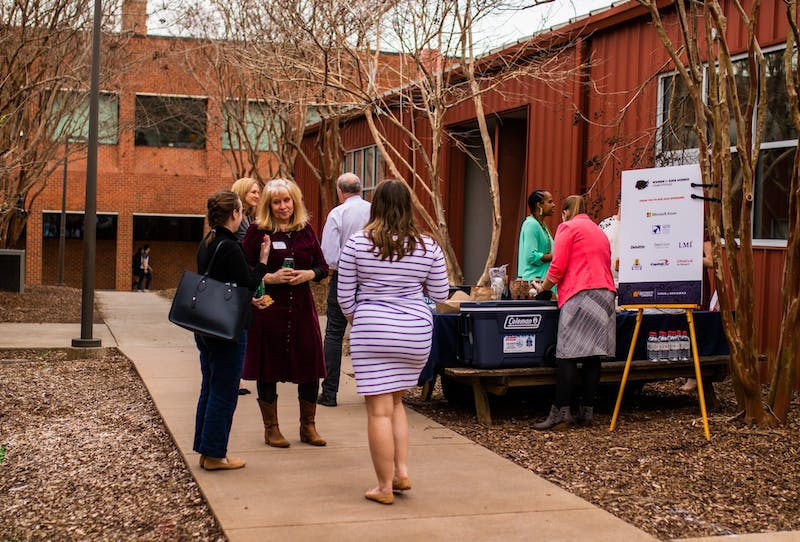 The School of Data Science hosted Women in Data Science Charlottesville — a virtual event featuring several prominent speakers — followed by an in-person reception on Friday aimed at highlighting the work women have done in the field.

“This is not a lecture about being a woman,” Burgess said in an email to the Cavalier Daily. “This is a conference by women, featuring women, for everyone who recognizes that data science has many faces and voices. That was the vision at Stanford when it all started, and that’s why we really jumped in early to say this is a mission we believe in and will be pushing here in Charlottesville.

The conference – which has been held annually since 2015 – also had the added theme of inspiring future generations of women to get involved in data science.

“We’re not seeing as many female data scientists as we would like, and we’re trying to change that,” said Daisy Glotzhober, data scientist at Deloitte.

Glotzhober shared how she helped start a women in analytics training program at Deloitte. She hopes this will help internally develop the company’s female practitioners with data science skills to make the field more equitable and close the gender gap in data science.

Glotzhober — along with fellow Deloitte data scientists Lauren Moy, Anuleka Ellan Saroja, and Tanya Balsky — took part in a panel on Trustworthy Artificial Intelligence. The panel discussed other ways to make data science fairer by considering the importance of mitigating the risks of AI and developing it ethically.

The group demonstrated these claims by highlighting a few examples of the consequences that occur when AI is mishandled. For example, Balsky mentioned a case in which an algorithm for an emergency room prioritized people for treatment based on race, which resulted in people of color receiving much slower service than white people. Glotzhober also cited an Amazon algorithm for evaluating resumes to hire employees that had a preference for men because its database of former employees had mostly male resumes.

Overcoming these challenges is not easy, as there are barriers to implementing ethical AI, such as the lack of diversity in staff teams and the absence of a framework to establish more equitable methods.

“Eighty percent of those organizations that develop AI solutions don’t have any type of framework for identifying ethical risks with their AI systems, let alone communicating and mitigating those risks,” Saroja said.

According to the panel, while a complete overhaul of development processes toward ethical AI is difficult, creating a roadmap and accelerating progress over time can be practical.

“Going for a more incremental, incremental and scalable solution is something more realistic and also more palatable to our customers,” Glotzhober said.

“Look for mentors and sponsors,” Saroja said. “Wherever you are in your professional journey, you need to have a network of people you can lean on for professional advice, career opportunities and also [to expand] your skill set. You will realize very quickly in your career that learning does not stop after graduation.

Throughout the day, four other panels featured covert surveillance technologies, applications of data science in education, data and human rights, and data science as a career, respectively.

The virtual conference ended with a fireside chat between Russell and Alana Karen, Google research director and alumnus of the university. Karen shared her own story of entering the male-dominated field through an internship at Dartmouth and provided advice for women also looking to kick-start their careers. She particularly stressed the importance of carefully considering the comments.

Karen emphasized the merit of failure on the path to success. In her book “The Adventures of Women in Tech: How We Got Here and Why We Stay” – which Russell read aloud at the event – Karen shares the value of reaching new frontiers, especially as a underrepresented individual.

“I now anticipate failure,” Karen wrote. “I’m aiming for a big goal, and I always have a goal in mind, but I see this plan as alive.”

The conference drew attention to the added pressure a woman or person of color may feel to pioneer. Karen said she believes it is necessary to think carefully and choose the rocks – a metaphor for things that can weigh on success – that one wears carefully.

“Yes, help others, but [be] moderate,” Karen said. “Yes, listen to the feedback, but also feel comfortable seeking help if you think the feedback isn’t accurate.”

For Russell, the conference was driven by a larger mission – the urgency to create an inclusive data science community.

“Diversity and equity are issues of yesterday, today and tomorrow and we understand that they have real consequences.” Russell said in an email to Cavalier Daily. “The School of Data Science has a mission that specifically aims to integrate diversity, equity and inclusion into all its actions. We are committed to making this mission a reality.